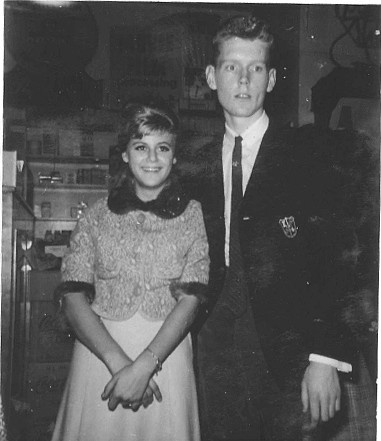 Although many of us now think of Fridays as Casual Fridays--started in the workplace in recent years--we're going to have a series of "Fashion Fridays." I never liked Casual Fridays in the workplace and I usually dressed professionally on that day anyway. Somehow I didn't think it built confidence in patients coming to see the heart surgeons and find the office staff running around in sneakers and jeans. But let's get back to AB of the 50s/60s. Let's honor the kids who dressed up nicely each day and gave us those added memories. I do believe that Dick Clark played a big part in keeping the kids looking nice, as a dress code was pretty strictly enforced...and you best also not be chewing gum on the dance floor or you might be called to spit it out in the wastebasket behind the podium. You all know that we had some stylish teens back in the day who appeared on the show and became so popular they were chosen to be Regulars and forever in history have that status attached to their names. There were clearly some fashionistas amongst the gals on the show and a lot of spiffy guys.

Isn't Frani just adorable in her fur-trimmed jacket? And Tom is sporting a smokin' jacket (not smoking jacket, as that's something else again). So, kudos to our first two fashion winners in our Fashion Fridays series from the late 1950s/early 1960s. I've never seen this picture before and you don't see a lot of pictures of Tom Hogan...so I hope you enjoy this treat from Bonnie Baker exclusively to my website. - Marsha