In Bunny's words, here is an exclusive she has given to my website: "Hi Marsha~~~ Again, coming full circle from dancing on American Bandstand as a teenager to dancing on "Two and a Half Men." Booked four days on "Two and a Half Men" as a Principal Dancer performing with John Cryer and Ashton Kutcher in my scene, which I have to keep secret now, but I can tell you that it will be shown in January as the finale - 12th show - of half of their season. Fun show to do and a big surprise in store for everyone - huge finale!!! Had my own trailer." 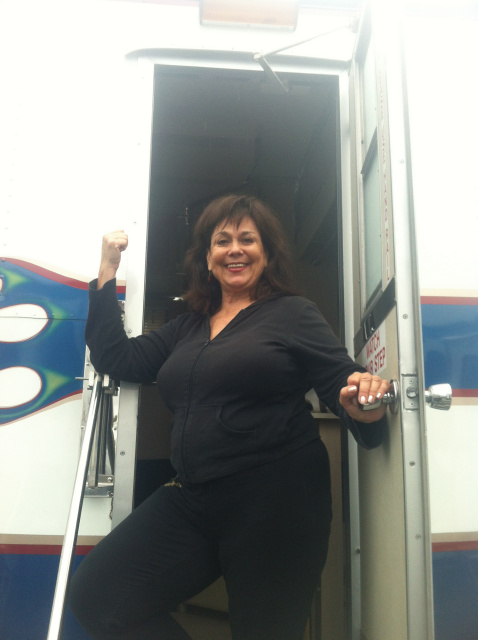 marsha
Hi Bunny...I did not get to see the season finale. I guess the date just sneaked up on me and now I will have to look for reruns or maybe it will be shown on youtube? I had hoped to get a reminder because I had been so busy. I do hope others got to catch the show so we can get some feedback.
Reply

Bunny
Hi Everybody, Hope you enjoyed the show. My singing with Ashton Kutcher and John Cryer was brief.....but - for those moments I had their full attention plus the Policeman. What you saw us to in this number took three days of rehearsals and one day of a shoot. Felt lucky to be with these seasoned dancers who were so supportive of me.....they had my back. Their dancing is to the count of "8" much different than our dancing on American Bandstand.
Reply

nancy robbins
Great picture.Bunny! I've seen you on several television shows and really enjoyed them. I'm looking forward to the upcoming one. Best wishes for a great holiday season.
Reply

Bunny Gibson
Marsha.....show date is January 9th....and it is quite a big finale!
Reply

Jeanne
Hey Bunny, will be looking forward to watching you and Ashton, he is so funny and so cute!!! And your own trailer, what a deal. You look great and so happy in this photo. Happy Holidays too!!! Glad Marsha has the exclusive...
Reply

Bunny
Thanks Jeanne......working lots since this show....feel always fortunate to be dancing. You can catch me in the Cerritos Auto Square and United Healthcare commercials. Lots of times I wear a "gray" wig....but think you still will recognize me. Keep on dancing, Bunny
Reply

Bunny Gibson
Great Jeanne. It will be on January 9th. Mila came to the set that day.....two lovebirds! And she certainly is adorable!
Reply

AB Fan
Bunny, Thanks for letting Marsha know about this wonderful opportunity. I was, am and will be your fan always! I am looking forward to seeing you in the show.
Reply