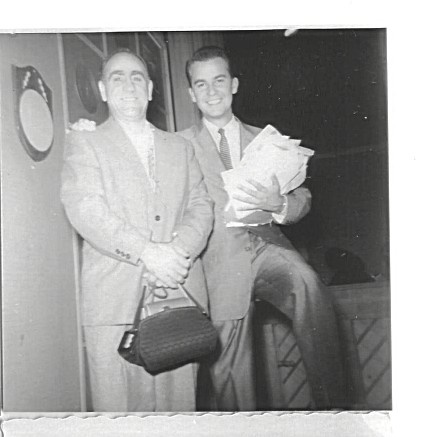 ...and Mr. Tolas holding his wife's handbag" :)) This picture has never been seen by the viewing public before and it is exclusive to my website courtesy Terry Tolas and her private collection. Many of her pictures and many of my other collections are exclusive to my website and were not seen before their arrival here. Without the friends and visitors who have come to my website, I would never have been fortunate enough to have such priceless history of the early days of American Bandstand. Dick Clark himself expressed his thoughts to me when he said my site was "remarkable" and he added "I really appreciate it." You can see his letter to me on my website as well. Dick Clark would never acknowledge a website that wasn't doing right by the AB experience.

This is a terrific picture of Dick Clark in the late 1950s, and he appears to be holding an armful of mail--probably a lot of fan letters and business matters for his day! Pictured with him is Terry Tolas' dad and she put a smiley face when she added "...holding my mom's handbag..." You can see how accommodating Dick Clark was to those who came to the show, and Terry went a number of times. She became friends with some AB Regulars and that will be apparent as we go through her collection one at a time--whether it be a picture, a letter or a piece of memorabilia. Let's all do a thank-you to Terry for this type of generosity to the history of AB and to the fan base that still is following this over a half century later.