A SPECIAL AMERICAN BANDSTAND REMEMBRANCE OF ANDY WILLIAMS...
The topic one day at the website was for Regulars to mention their most embarrassing moments on the show...and the following came from Charlette Russo...and we can all say and agree with her last part of the statement...that it wasn't so embarrassing afterall--I would add that it was quite special to be so singled out! 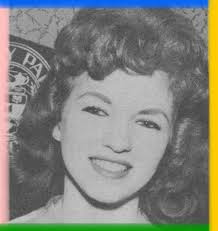 CHARLETTE RUSSO (AB Regular mid to late 50s, friend of the site, and contributor of photos and history): "Hi everyone, Mine wasn't as embarrassing as Carole's but at the time I was really embarrassed. Andy Williams was on the show and he needed a girl to sing to and to look like she was singing to him. For some reason he knew my name and asked Dick Clark for Charlette, I was trying to hide but everyone was telling him where I was standing. Well, he put me on a stool in front of him, I was facing him and then he began to sing. I was the typical, embarrassed teenager! Now that I think about it it wasn't so bad after all!!~~ Charlette"

Sad to post this blog topic about the passing yesterday (Tuesday) of Andy Williams. I understand he had bladder cancer. I loved so many songs that he is associated with...too numerous to name. I suppose most would say Moon River, but that was not my favorite even though it was from Breakfast At Tiffany's. I have many of his old LPs.

Bunny Gibson
Andy Williams was a great model of a really "Good man!!!". When his ex-wife had a problem with the law, he stood by her......."No matter what" - he showed her love. His voice was calming and came from the "heart". Bunny Gibson PS Lucky Charlette Russo!
Reply

Marsha
Hi Bunny...yes, I remember so well the trial and all the media focus...and he stood by his wife. I have an LP cover with him and his family and Claudine Longet who was his wife still at that time is in that family picture...now to just find the LP... lol. Bennie said his favorite Andy Williams song, and I am having a senior moment and cannot remember the less known love song that is my favorite...but I think the song I must remember listening to and loving in my teen years was LONELY STREET.
Reply

Donna
I loved Charlette's story about Andy Williams ! I am so sorry I missed seeing the show the day Andy sang to her.
Reply

marsha
Donna, I also love that story and I remembered it right away when I heard about Andy's passing. Actually our friend Lila was the first to tell me. I had not been following the news that day. I too would have loved to have tuned in to Bandstand the day that Andy Williams sang to Charlette. That is really special. I rarely missed a show.
Reply

Bennie
Two of my fave's that appeared on AB in the Philadelphia years were Andy and Bobby Darin. Both became big stars and good friends later in life and both were very close to Bobby Kennedy. I recall Andy singing the Battle Hymn of the Republic at Kennedy's funeral service. He had a ton of hits but I kind of favored Dear Heart.
Reply

Marsha
Bennie...As I mentioned in my reply to Bunny, I would have to say LONELY STREET is one that I really like right up there at the top. I think BUTTERFLY might just tie for that spot. Always loved it.
Reply