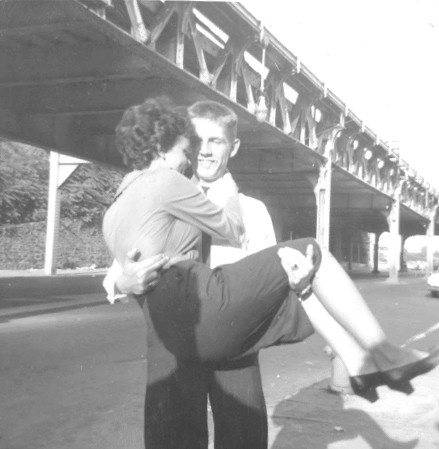 picture of Billy Cook carrying AB Regular Arlene DePietro is courtesy Bonnie Baker Collection. There were some guys on American Bandstand who just flat-out had that "likeability quotient" and AB Regular Billy Cook would be on anyone's short list for that--although I have to smile when I say he was a tall guy! He had very good healthy looks, an infectious smile that made you want to smile back, and oh could he dance! I have a feeling he also had good character, as Dick Clark had Billy Cook join him on the road with Caravan of the Stars and he also brought Billy Cook out to California. Post American Bandstand, Eleanor Ligman tells me that Billy gave a short try at a singing career (as a few other Regulars did) and she stated that he cut a record on the Lawn Label titled "Mystery Girl." It's a rare 45 rpm record for sure, and I was just fortunate enough to purchase it. Looking forward to receiving it by mid September. I wonder if it is even more rare since this is a "D.J. copy."

Marsha
Hi Keri... He was one of my fave guys on the show also. I wish I knew whatever happened with him, but I don't. I did read on another website that no longer is active that he passed away but I don't have any details to back that up. I also recall someone visiting my website who said that he had passed away, but I do not have all the back-up papers from years ago. I am really sad to have learned just how many Regulars have passed away. I used to have a memorial page here.
Reply